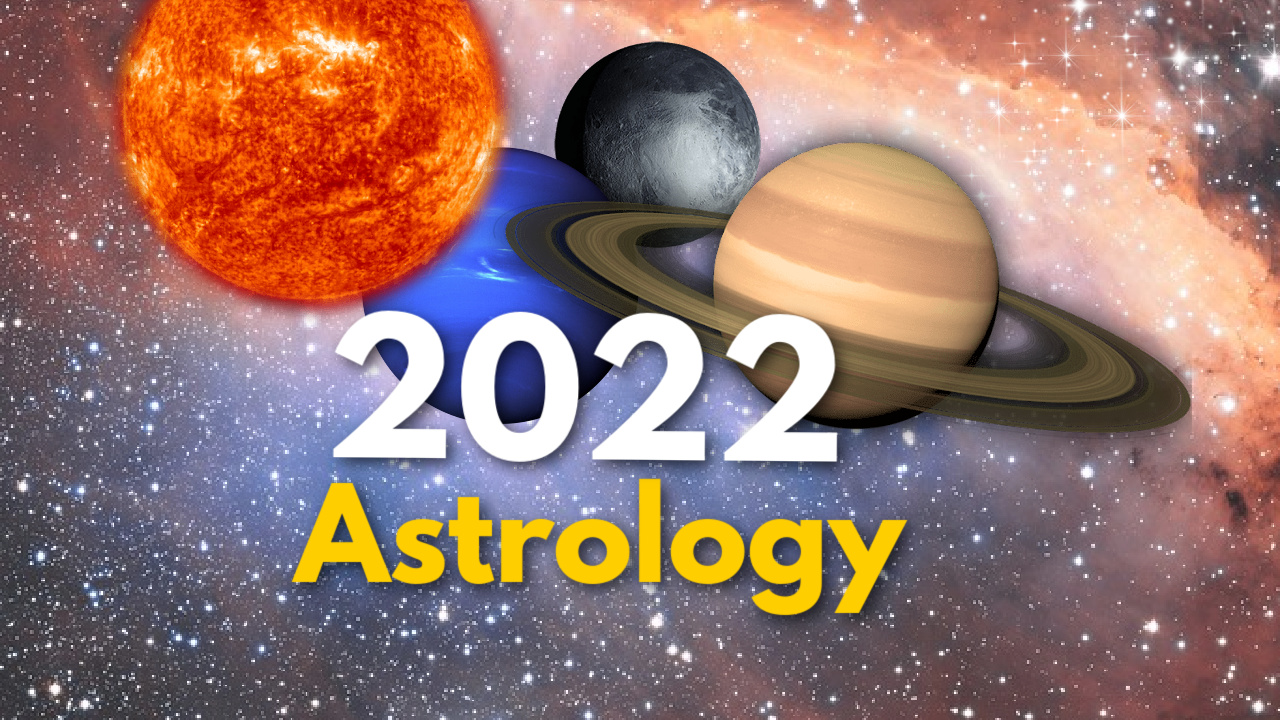 The Astrology of 2022 is very interesting. Let’s take a look at the major Astrology transits of 2022 and their potential (without getting to complicated or taking too long)!

We start 2022 with energy carried over from the end of 2021, with the third and last exact square between Saturn in Aquarius and Uranus in Taurus, Jupiter moving into Pisces AND Venus retrograde in Capricorn.

Venus will station retrograde conjunct transformative Pluto. Venus themes, like values, money, business, art, creativity and love are up for review until the 29th of January 2022. The shadow period ends on March 1st, after which I expect to see people change partnerships, jobs or even hobbies.

On the last day of 2021 (how ironic) Jupiter dives into Pisces. I hope to see this ingress relieve of restrictions and expand the delightful feeling of hope and empathy as it did when Jupiter dipped his toes into Pisces on May 13th 2021. Piscean territory will bring some breathing space and new growth after Jupiter was a little restricted in Saturn ruled signs of Capricorn & Aquarius.

With that energy marking the start of the Astrology 2022, this is an overview of what you can expect in the coming year:

What are the Astrology 2022 Predictions?

Lunar Nodes in Taurus and Scorpio

The South Node will shift from Sagittarius to Scorpio, while the North Node will move from Gemini into Taurus. The Lunar Nodes will stay there for 18 months, bringing us Eclipses along this axis. These Eclipse themes will be crucial for the expansion of the collective consciousness, as well as personal soul growth. Expect a lot of healing and purging with the South Node in Scorpio, and growing into new ways of being including more sustainable and reliable structures with the North Node in Taurus.

The Pluto Return of the US in Febuary will be significant globally, as it might reflect a complete overhaul of the way they govern their country & power. Where Pluto represents the underworld, I would not be surprised to see hidden corruption coming to the surface, a change in leadership roles and power dynamics. I also feel like the worth of the dollar might be up for destruction (even more so with Uranus in Taurus at the moment), which will have a huge riple effect on the global market.

Mars conjunct Saturn is happening again in 2022 (april 5th), as it did in 2020, when global restrictions got really intense. Which was no surprise back then, as Saturn rules restrictions and Mars rules intensity. This time they will join in Aquarius, the sign that rules society and groups of people. We might see groups of people getting stern again about structures they deem necessary for our society. But we will also see Jupiter conjunct Neptune in Pisces later that month, which might represent people ‘checking out of reality’ and not complying to boundaries anymore. I suspect a divide being palpable. Jupiter conjunct Neptune might also bring more development in the online/technology space, such as Virtual Reality.

May 29th is a big date with Mars and Jupiter coming together in the sign of leadership; Aries. Mars (assertion) and Jupiter (expansion) will reflect an explosion of energy and sense of action. We might see some impulsive actions, but we can also see of new leadership or new projects take form.

All of the Mercury Retrogrades in 2022 will start in Earth Signs, bringing a physicality to the contemplations we will experience during these reflective periods. I think we will take action on new ideas that might form during the retrogrades, which we will see solidified in our physical realities.

On July 31st, we will see the North Node conjunct Uranus in Taurus. This is huge and will bring unexpected ruptures or insigths, that will wake us up and raise consciousness on a global scale. How this will play out is always a guess with Uranus involved, it can range from a big economical change in (digital) currencies, to extremes in climatechange (floods?), to food or goods not being available, or even big news about extra terrestrial presence.

In October 31st, Mars will go retrograde in Gemini. The way we assert ourselves, the way we take action, and our focus will be up for review. In Gemini, the sign of gathering information and curiosity, we want to consider all avenues possible. This might feel overwhelming, or perhaps slow (and Mars doesn’t like waiting), but this introspective time will be helpful in getting clear on next steps in 2023.

These Astrology 2022 predictions are based on major transits, but the unfolding of 2022 will be more nuanced as there are more (minor) transits at play during the whole year. I also did not touch on the Lunations here.

Want to know what these transits mean for you personally? Book your personal Astrology Reading with me here: